How are those free ebooks doing?

Well, this has been quite an experiment. It’s been years since I’ve done anything with self-publishing, so my adventure creating and distributing ebook versions of a couple short stories has been most illuminating. And because I have an unhealthy fixation on numbers, I thought I’d share some details with you.

Thus far, the ebooks have been downloaded more than 1400 times across all the available sites, which is far better than I’d hoped for. Several folks have reached out to tell me they enjoyed them, which is immensely gratifying. 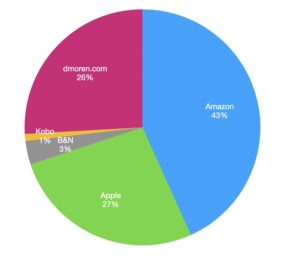 Unsurprisingly, the top place for people to download the books was Amazon with about 43% share; that’s one big reason I went to so much work creating ebooks—frustrating as dealing with Amazon can be sometimes, the sheer ease of downloading a book onto your Kindle is hard to beat. In second place was Apple, at 27%—disproportionately large, I suspect, because many of my readers probably follow my work in the Apple sphere—but, close behind that was this very website at 26% (though my stats there are bifurcated because I definitely did not plan ahead to track the downloads, so had to patch together some stats retroactively, whoops!). I’m glad about that, because I know sideloading files onto the Kindle takes some extra steps; fortunately, doing so on an iOS device has gotten much easier now, thanks to Safari’s download support.

Distantly below, we have our three bottom place finishers: Barnes & Noble with 3% (though its sales reports are apparently delayed by a few days), Kobo with 1%, and…uh Google Play with absolutely zero. Maybe that’s because I had to wait to add the link, since my account was still being approved on Monday, or because—weirdly for Google—its analytics tools are terrible, or maybe nobody in my audience gets their ebooks on Google. Probably that.

Also interesting for me, and way more inexplicable: “Pilot Error” was downloaded significantly more than “Showdown” from almost every single site.1 I don’t know why. Maybe because it was listed first? Did people read “Pilot Error”, not care for it, and then skip the second one? Could be. Very interesting. Maybe one of you mysterious readers will let me know!

I also want to thank whoever added them to the Galactic Cold War series page on Goodreads 2, and all the people who’ve rated them. Warms the old cockles of the heart.

All in all, I’d say this experiment was a success! So who knows, maybe I’ll put out some more titles at some point. Right now, though, I’m buckling down for the launch of The Aleph Extraction. Hoping to do some guest posts, podcast interviews, and more, so if you’ve got a suggestion or an opportunity for me, please don’t hesitate to reach out via the site or on Twitter.

Most importantly: Stay home and read a book.

This entry was posted in Business, Writing. Bookmark the permalink.