It’s become a tradition around these parts, when the new year rolls around, to talk a little bit about my writing finances. And guess what? As wild and bizarre as 2020 was, I—like most everybody out there—still had work to do, and a job to get done. For me, that predominantly meant writing and podcasting, and since I know there are people out there curious about what the life of someone in those industries is like, I’m here to share a few details of what my business looked like. (And remember, it is a business, not a passion or calling that’s somehow magically above the need to generate money in order to eat and live.)

Allow me to offer my annual caveat: this is a picture of my career and my career only, and these lines of work are especially variable—and that’s in a normal year. Attempts to extrapolate what someone else’s career looks like from this single data point are unwise and highly inaccurate. Your mileage will vary. As always, I’ll point you towards the excellent annual post by author Jim C. Hines, who has been doing this for quite some time, and whose posts were an inspiration for this.1

With that out of the way, let’s dive in to my traditional breakdown of income in 2020. 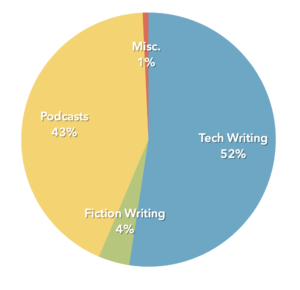 As in previous years, I won’t be sharing exact dollar amounts, but I will say that my gross income this year was down a bit from last year, and that number remains under six figures.2

Takeaways! Well, 2020 was…a year. Here’s how it shook out for me. After a meager decline in the percentage of my revenue that came from tech writing, that number went up somewhat surprisingly in 2020, due to a few factors. First, eagle-eyed readers might have noticed that the number of Macworld columns I write every month decreased this past year3; that was slightly offset by a very small raise I managed to secure way back in January, though it still meant a significant drop. Fortunately, one thing that did compensate for that was that I negotiated a rearrangement of my pay structure with another of my regular tech writing gigs, which resulted in a nice bump.

Podcasting dipped a bit in the overall revenue mix this year: notably, for the first time since 2017, it wasn’t the biggest chunk of my revenue. That’s in large part because one of my regular podcasts saw a significant tail-off in advertising back at the beginning of 2020; another show, meanwhile, experienced a dip in the summer/early fall, though it had already bounced back a bit by the last quarter of 2020. Membership has become a more significant revenue generator in my tech podcasts, with Clockwise Unwound now providing weekly bootleg episodes to paying subscribers and the modestly successful Rebound Prime. Those both helped soften the ups and downs of podcast ads, though they don’t entirely compensate.

And then there’s fiction writing. Last year, I was very pleased in the upward trend I saw, which went from 5 percent in 2018 to 11 percent in 2019. That made me—ah, foolish early 2020 me!—bullish on the future, though I did inject a caveat:

Going into this year, I have The Aleph Extraction coming out in May, and…that’s it. Currently, I’ve got no other books under contract, though I’m hoping one or two other projects might hit maturity in the not too distant future. But barring a substantial increase in the value of my deals, I’m not confident that it will bolster the bottom line that much.

Aleph did indeed come out in May, and that was great, though it ended up looking kind of different to my previous releases: no launch events, no book signings, and no cons to attend made it a mostly solitary affair. I did, however, dip a toe into self-publishing by putting out ebooks of two Galactic Cold War short stories, which was a fascinating experiment, though not particularly a profitable one.4

In better news, I did manage to pull in some royalty payments from The Caledonian Gambit and The Bayern Agenda, which have both earned out their advances, and I’m hopeful that Aleph will follow suit. But I didn’t realize any revenue from new deals in 2020, which is the big reason that the fiction percentage went down this year, to pre-2019 numbers.

As ever, the most important takeaway from being a freelancer is that your income is generally not predictable. Here’s what that looks like for me over the last several years. 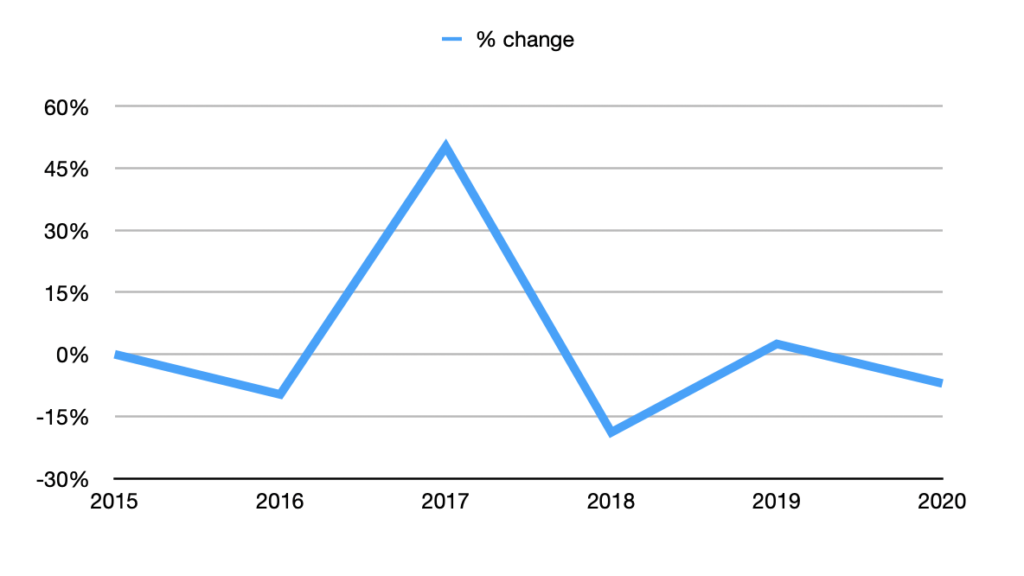 What I said last year largely holds true: I’m very privileged to be in a position where I can deal with the ups and downs of freelancing. My income remains diversified, I still have savings, and my partner’s job remains stable—or at least, as stable as anything can be in the time of COVID. One silver lining to the pandemic: my business expenses were way down, thanks to a lack of any travel whatsoever, which will likely continue to be a theme for the first two-thirds of 2021, at least.5

Heck, in the middle of this, we were able to actually buy a house, which was an exciting and terrifying adult-like decision.6

But 2021 is a big question mark right now. We’re still deep in this pandemic for the better part of the year, probably, and even after that, some of the effects are likely to linger. Book sales have tended to be up, but as my own agency pointed out on Twitter, the impact is not necessarily evenly distributed.

I’m choosing to remain hopeful for 2021. I’ve got a few projects that I’m hoping might finally get off the ground, and I’m looking for new opportunities as well. We’ll see how the year goes! Just remember: be good to one another.

This entry was posted in Business, Writing and tagged my writing finances. Bookmark the permalink.