It’s that time of the year once again: the time when we talk about numbers.

Wooo! Numbers! Nothing gets the crowd riled up like good old math, especially when it comes from someone whose specialty is nominally words. But what, I ask you, are words but equations with letters?

Anyway, every January I post details about my finances for the past year. I’ve been doing this since 2018; it originally started out as a way to talk about the business of writing fiction, but since that has historically been a small chunk of my income, it’s more about how I earn my living as a freelance writer and podcaster.

As per usual, I’ve been inspired by several other writers, most notably Jim C. Hines, who’s been documenting his writing income for much longer than I’ve been in this game. And, as is also custom, I want to make it clear that this is just my personal experience, and all self-employed individuals (by nature) differ wildly. So don’t bother using this to extrapolate what your favorite writer or podcasting personality makes, because I guarantee you, it won’t hold water.

On to the math!

I don’t disclose dollar figures but, as in the past, I will say that my total gross income was well under six figures, and that this doesn’t include income from any investments1, just the freelance work I do. Nor does this include my partner’s income. 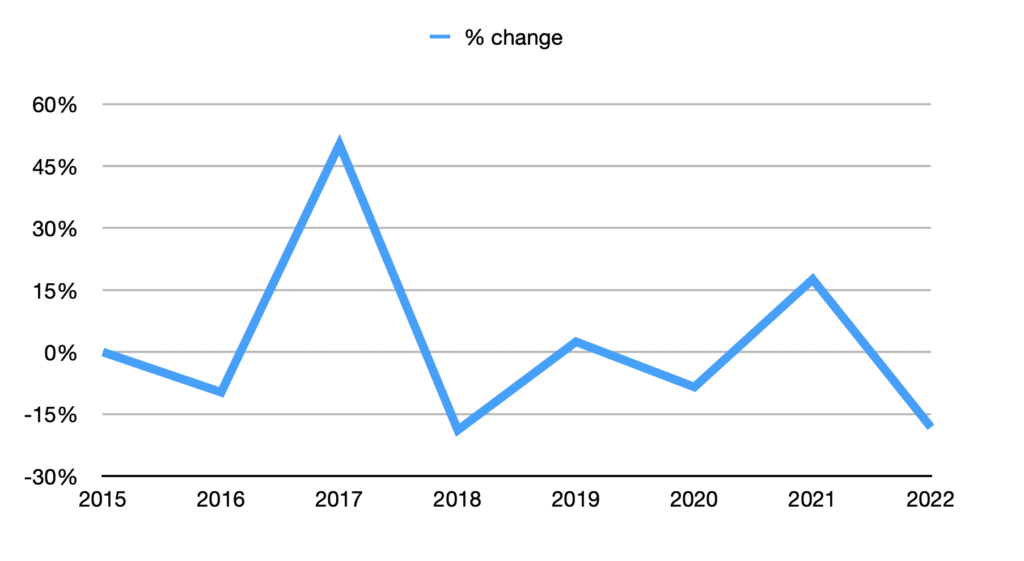 Broadly speaking, 2022 ended up being kind of a down year for me financially, which comes down to one key (and very positive) reason: in July, my partner and I welcomed our first kid and I took roughly six weeks off from everything. That primarily affected my tech writing income, since my podcasts continued airing in the meantime, thanks to my co-hosts and some excellent guest hosts.2 Ad income from those shows also lags behind a couple months, so I continued earning some money from earlier shows even while I was off.

But, largely as a result of taking that time off, my overall income was down 18 percent from last year.3 This was my second lowest amount of yearly income since I’ve been self-employed, and my lowest since 2016. But again, all of that comes with an asterisk since I voluntarily took a month and a half off from work. Had I worked during those six weeks at my usual pace, I probably would have been almost exactly where I was in 2020.4 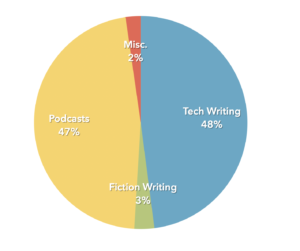 Two other major factors influenced my overall income drop in 2022. First, podcast advertising definitely took a hit in the last quarter of the year. My two shows with significant ad support had several months with very few ads at all. The good news is that membership support of my shows accounted for about 40 percent of podcast income, which helped me ride out the low ad sales.

Second, I signed no new contracts for fiction work in 2022, which also explains why the chunk of my income from fiction (just 3 percent) was the lowest its been since 2016, when I only had one published book under my belt.

Indeed, the bulk of my fiction income in 2022 came from royalties, both from my traditionally published books, as well as the short stories I’ve self-published. In fact, I made more from my self-published sales than from any individual novel’s royalty payments, and only a hair less than all my traditionally published novel royalties combined. That’s not exactly a high water mark, as, to be clear, neither brought in a lot: we’re talking a few hundred bucks.

It is, however, a reminder that for all but the most successful traditionally published authors, advance payments are what primarily drives income.5 I had just one last advance payment in 2022, for The Nova Incident, which accounted for the largest single payment I got from fiction writing this year.

It’s also worth noting another factor: I got hit by foreign exchange headwinds. The publisher of the Galactic Cold War books, Angry Robot, is based in the UK, which means I get paid in British sterling, and the pound dropped considerably against the dollar this year, as you may have heard. So all of my income from those books was less than it might have been in more favorable macroeconomic conditions.6

My foray into self-publishing hasn’t exactly filled me with enthusiasm: there’s money to be made there, for sure, but it seems to be a case of spending upfront with a return on investment—and that’s a tough sell, as returns are never guaranteed. To be fair, I didn’t do a lot of marketing for my self-published work, mainly trusting to my existing channels, including my mailing list and social media7. As of this writing, the story I published in 2022, “Homecoming”, sold just over 700 copies, netting me a few hundred bucks. Less than I probably would have been paid if I had sold the story to a publication outright.8 But them’s the breaks.

Expenses were also back up to 2020 levels, primarily driven by once again traveling for work and buying some new equipment, though they remain largely lower than my pre-pandemic levels (changes in my home office and healthcare situations, as detailed last year, account for some of that as well). 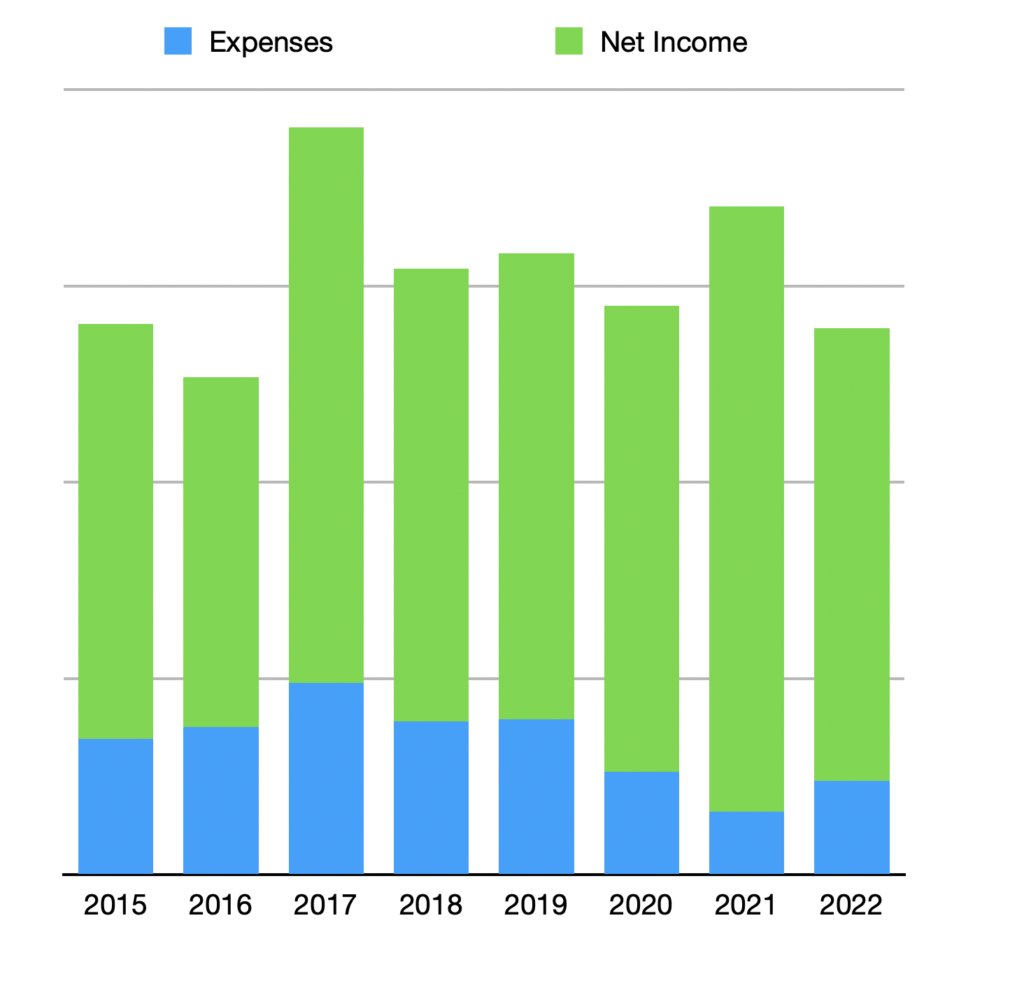 Looking forward, I’m hopeful that 2023 will be an upswing for fiction work—I’ve got some stuff in the works that I’m excited about (more about which when I can share information) and I’m hoping to get back to doing some of the podcasts that I’ve let lie fallow while adapting to my life changes.9 But there’s a lot of uncertainty nonetheless. 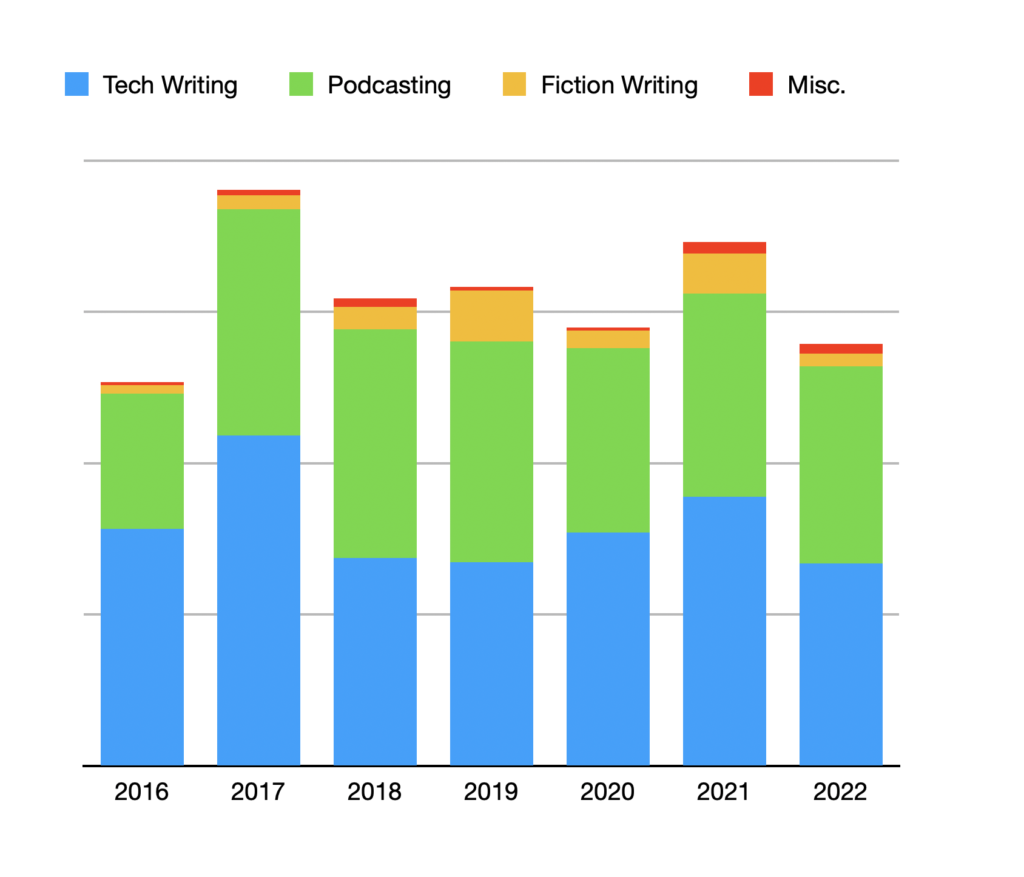 As always, my goal has been to grow the percentage of my income from fiction writing, but I think I’ve realized after six years of detailing my finances that this isn’t going to be a linear sort of affair. Some years are up, some years are down, just as with my overall freelancer income, and while I’d like to see that fiction trendline move more consistently upward over time, I have to resign myself to realizing that it’s a marathon, not a sprint.

But a big thanks to everybody out there who’s supported my work, whether it’s by becoming a member of one of my podcasts (The Rebound, Clockwise, or The Incomparable), subscribing to Six Colors, or buying my books. It all helps me continue cobbling together this weird existence I’ve made for myself, and I’m immensely grateful that I get to keep doing it for another year. We’ll see you back here in twelve months to see what’s what.

This entry was posted in Business and tagged my writing finances. Bookmark the permalink.