To recap: every year since 2018, I’ve put up a post talking about my finances as self-employed writer and podcaster, with a particular eye towards my work as a novelist.

Having been my own boss for more than seven(!) years now, I’ve grown accustomed to keeping diligent track of my finances1, mainly because I need to. But I also think there’s a utility in sharing this information with others—especially for my colleagues who are working writers, or for those who might be interested in embarking upon it as a career and wonder what it’s really like.

We—especially in the U.S.—often consider money a taboo topic, one that can easily fall into boasting or self-aggrandizement. But I think that making the topic off-limits does a disservice to most people, and to folks in my line of work especially. I’ve greatly appreciated transparency from authors like Jim Hines, Kameron Hurley, and John Scalzi, which has helped to demystify the business for me.

As usual, I’ll preface this with a note: this is my experience and my experience only. If there’s one thing to take away from the self-employed, it’s that we’re all a little bit different, so don’t take this as gospel; it’s merely one data point among many.

As in previous year, I don’t break out the actual dollar figures for my work.2 But to provide a bit of color, my income was up nicely in 2021, making it my second-highest grossing year since I’ve been self-employed. (And probably more than even a few of my years as a fully-employed editor.) However, even that gross figure is still well under six figures.3

I should also note, though I’m not sure I’ve done so in the past, that this is only income from employment, not from any investments or other income-accruing sources.4 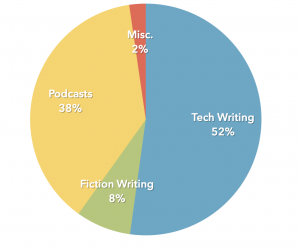 Big picture: I’m a little surprised that 2021 ended up being such a banner year, but interest in podcasts, tech writing, and even fiction definitely seems to have stayed stable, if not ticked up, during the pandemic. Advertising for podcasts has seemed to thin a bit; in 2018 and 2019, podcasting was my biggest source of income, but in 2020 and 2021, it’s fallen behind tech writing again.

This did mark the first full year of our membership program for The Rebound, which has been a nice little bonus. My back-of-the-envelope calculations suggest that direct membership payments from all of my shows account for a little less than half of my total podcasting income, with ads making up the remainder—that’ll definitely be something I continue to keep a closer eye on in the next year or two.

Tech writing was up a little bit, thanks to some additional projects that I took on, and a readjusted fee structure for one of my biggest clients, which went into effect in early 2020. It’s provided a stable base for the rest of my income, but it’s not a sector that I’m particularly trying to grow at this point.

Fiction writing jumped back up again after a lackluster 2020, in which it accounted for 4 percent of my income. 2021 doubled that to 8 percent, though still shy of my high-point of 11 percent in 2019. The big driver this past year was selling another book (The Nova Incident, which comes out this July!), but The Aleph Extraction also earned out its advance, joining The Bayern Agenda and The Caledonian Gambit. That means I now get a little bit of royalty income for them each six months.5 However, all three of my books are earning money, which is a nice place to be, even if it’s not live-on-it income.

I’ve also had a surprisingly good year for weird miscellaneous income, which doubled since last year, mainly from merchandising and some affiliate fees. But it’s still a tiny piece of the whole pie.

While I’ve been talking about gross income above, one other big factor helped net income this year: expenses were down. And I mean way down. As a percentage of my income, they were half of last year.6 I did go to my first conference since the pandemic started back in December, but in part it was to use up airline credit that I had from canceled trips in 2020. I also didn’t have any big work purchases in 2021, which I expect to change next year as I probably replace my iMac and my iPad.

As I mentioned in my 2020 write-up, my partner and I bought a house last year, and most of 2021 was spent doing renovations. While those costs don’t directly factor into my business, the fact that our mortgage is significantly higher than our rent does adjust my home office costs. This was also the first full year where I was not paying for my own health insurance out of pocket, which made a huge difference in business expenses. I feel extremely fortunate to have a partner who gets health insurance as part of their job, and it’s another reminder of the deep inequality in our society that not everybody can afford the care they may need.

As always, the life of a freelancer is more inconsistent than anything else. My income’s varied a lot over seven years, and will probably continue to do so for the foreseeable future. But after doing this for the better part of a decade, I have a better idea of what to expect, how to handle expenses and weather low periods, and generally just how to manage my finances. In general, I’m in a position where I’m not too worried about making it through a given year, though that’s always just a hair’s breadth away: for example, if I were to lose any of my key clients, I would find myself scrambling to make up the difference. But I think I’ve diversified my income enough that it’s not as though it’ll all dry up at once.

As always, I’d still like to continue to expand my fiction income, though there are limitations beyond me in that area. One experiment I’m planning on is self-publishing another Galactic Cold War short (à la my two previous) sometime before Nova comes out in July, and this time charging a small amount for it, just to see how it plays out. I’m also setting myself the goal of finishing and revising a new book by halfway through the year.

And that’s all I’ve got for my finances in 2021. I hope this was an interesting read for you, and if you’ve got any questions about it, feel free to drop me a line or hit me up on Twitter.

This entry was posted in Business, Writing and tagged my writing finances. Bookmark the permalink.